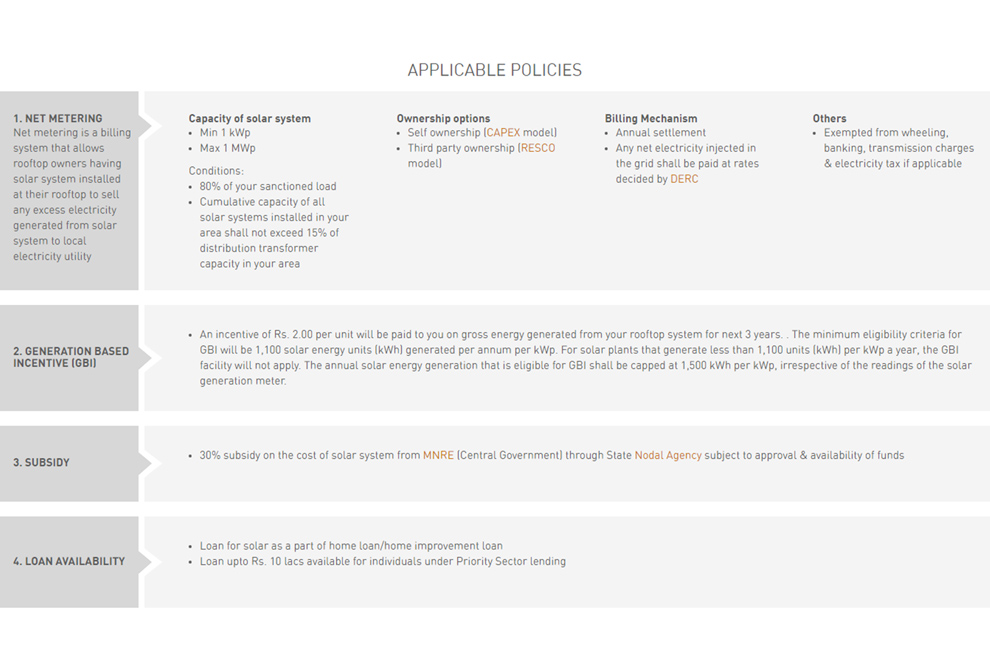 While Delhi has always been at the forefront in solar policy making with solar net-metering having been notified as far back as September 2014, on June 6th, 2016, the current government of Delhi lead by Mr Arvind Kejriwal has further buttressed the Delhi Solar Policy and has sold everyone the dream of a rooftop decorated with a solar system that would allow them to harness the immense power of sun to generate electricity. The announcement of the solar policy of Delhi 2016 aims to make Delhi a ‘Solar City’ with a target that by the year 2025, the state would be able to produce about 2GW of solar energy. This equates to solar contributing to more than 6.5% of electricity produced within the state. As of September 2016, Delhi claimed to have 35 MW of rooftop capacity installed, and if the target of another 1945 MW is to be achieved in the next 9 years or so, a large percentage of the 30 lakh residential and 12 lakh commercial, industrial and other consumers that are in Delhi must come together for the cause of going solar.

The government has played its role by publishing the roadmap and a few convenience lead announcements such as those listed below, but the ultimate decision to go solar lies in your hand:

These are just some of the key highlight announcements that the government of Delhi has made in order to increase the push for rooftop solar in India. With >300 days of bright sunshine expected annually in the capital city of the country, and with government backing and making things simpler than ever to go solar, it is the perfect time for you to go solar.

You may just be wondering as a resident of Delhi, how much of a difference you will see by going solar? The short answer is, a lot. We have developed an infographic of a typical Delhi-based resident, by inputting his details in our Solar Calculator, on the impact he would have when he decides to go solar. 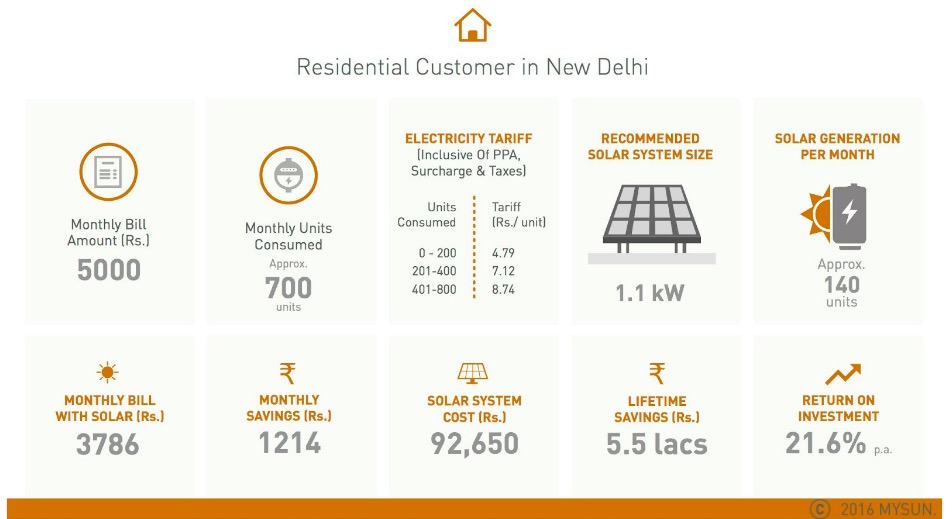 As per this illustration above, purely from a return on investment(ROI) point of view, a typical residential energy customer in New Delhi (Image above) stands to make an ROI of ~21% annually for 25 years for a system that would cost just Rs 90,000 (1.1kWp), and this is even before the benefits of Net Metering or Generation Based Incentives are factored in. Of course, the size of the system and ROI will be different on a case to case basis. Compare this to an investment you would make in say stock markets or mutual funds and the gamble you take. Not only will going solar help you make huge lifetime savings, the contribution to the environment will be a gift for your children and several generations to come. Surely, this initiative from you will go a long way in ensuring that Delhi does not remain one of the most polluted cities in the world.

So go on Delhi, Register your Rooftop now with MYSUN and take action, because going solar has and will never be simpler and MYSUN makes sure that your journey to solarization is as simple as counting 1-2-3. With a list of pre-screened partners on board, MYSUN connects those interested in going solar to the best and pre-rated solar suppliers. We are literally just a call or an E-Mail away from you throughout your journey and you can find the details on the contact page. Also, if you are interested in knowing the state wise solar rooftop policies of each individual states in India, you can find them all collated at one place, right here.