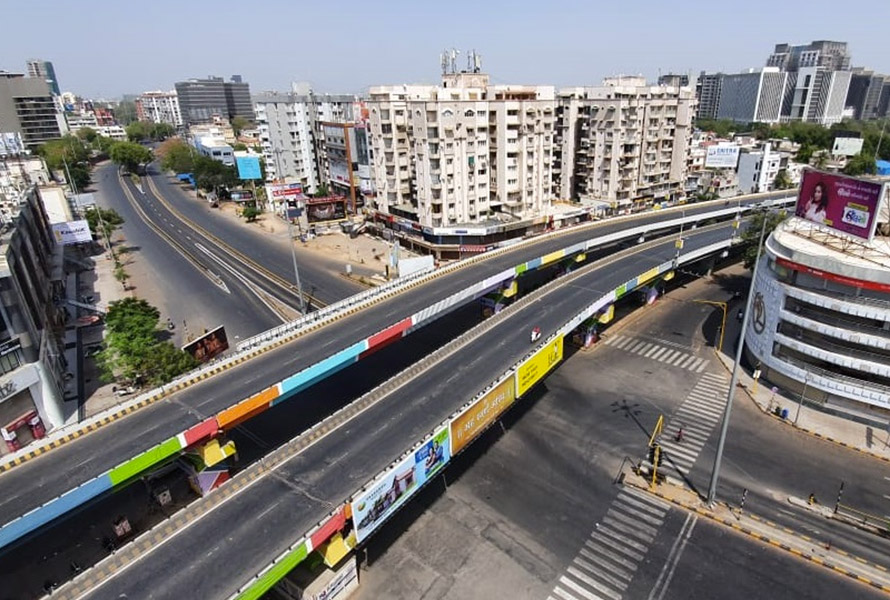 Gujarat, located in the western coast of the Indian Peninsula, is one of the fastest-growing states in the country. The state has managed to become the third-largest contributor to India’s nominal GDP, which is ₹18.85 lakh crore, comparable to that of the entire country of Vietnam.

With high production capacity, the state is a leader in industrial sectors such as chemicals, petrochemicals, dairy, pharmaceuticals, cement, gems, textiles and engineering, and therefore, home to over 800 large industries and 450,000+ micro, small and medium enterprises. This leadership position and the competitive environment arising out of such a large number of enterprises make power a crucial resource for the lifeline of every business in the state. For this, businesses pay lakhs, and in cases of large corporations, even crores on power bills every year.

Thankfully businesses in Gujarat are well aware of the benefits of solar. The testament to that is the ever-increasing solar capacity of Gujarat, bringing a more economic alternative to the businesses in the state, from which they can save millions on yearly power bills. Take an example of this Yarn and Fabric Company in adjoining state of Rajasthan which is saving around 190 Laks on power bills every year after going solar with MYSUN. Let’s check some more reasons why businesses should invest in solar in Gujarat.

Gujarat is one of the most solar energy-rich states in India. The geographical location of the state exposes it to almost 300 sunny days in a year, with solar radiation of 5.6 -6.0 kwh/m­­­­­­­­­­­­2 / day; one of the highest in the country. As per an estimate by the Energy and Resources Institute, the state has a solar potential of 35.77 GWp. All of this points towards the immense solar power capacity that businesses in the state can tap into.

Gujarat has been soaring high when it comes to the total installed solar capacity. As of mid of 2019, the state ranked 6th among the top 10 states with the highest installed solar capacity in India. The state has consistently increased its cumulative rooftop solar capacity from around 0.3 MW in 2010 to around 368 MW in 2019. Similarly, in utility-scale, the state has increased its capacity from almost zero MW in 2010 to approximately 2000 MW in 2019. This growth in capacity is a sign of the growing demand for solar from the power consumers in the state, which in turn, justifies the benefits they are getting from it. 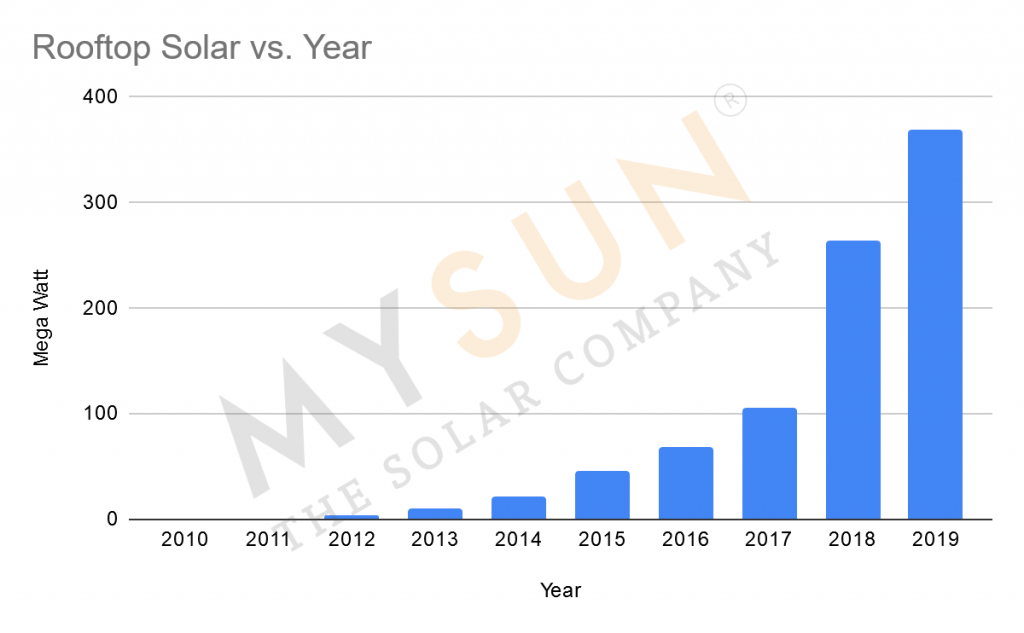 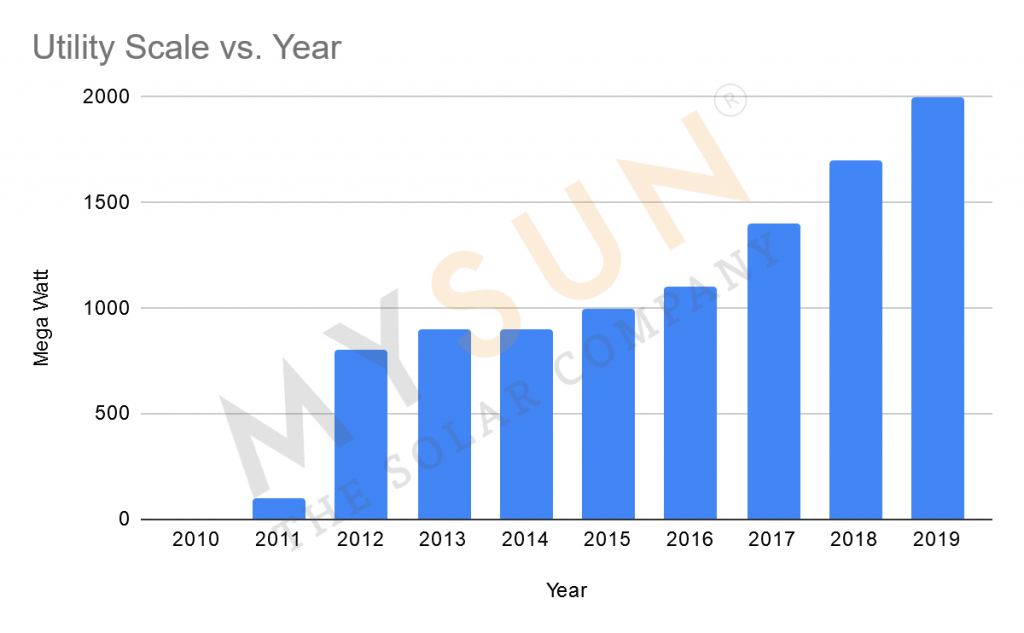 A conducive solar policy plays a crucial role in positively influencing the benefits businesses can reap by investing in solar. And Gujarat for sure has such a solar policy in place. With the net-metering facility applicable under the state’s solar policy, the commercial and industrial companies in the state can export the surplus energy generated by their solar system into the grid at a specified solar tariff. The policy also allows businesses in the state to avail Accelerated Depreciation benefits of 40% and 10 year tax holiday on solar projects. All of this increases the savings and the benefits that businesses can get with solar in the state.

To make solar affordable, the solar policy of Gujarat also makes loans available for businesses for up to Rs.15 Crore under Priority sector lending.

4. The Incredible Solar Saving Potential of  Businesses in Gujarat

Given the favourable geographical location and solar policy of Gujarat, with the right solar engineering, any business or organization can save a fortune in the state. For example, as per a media report, the Badrinarayan temple located in Surat brought its electricity bills down from Rs 1.5-2 Lakh per month to Rs 10-12,000 per month. That's a saving of approximately 93~94%! For businesses, such big savings will give them more funds at disposal which could be deployed in more important activities.

You can know the estimated solar saving potential of your business by running the MYSUN Solar Calculator. For example, if you are an industrial set up based out in Naroda, Ahmedabad and incur an average monthly electricity bill of Rs 10 lakhs,  you can save approximately 56% on your power bills every month.

As mentioned above, Gujarat is one of the leading industrialised states in India. The state has earned recognitions such as the world’s largest producer of processed diamonds and the petroleum capital of India. The state is also known as the largest manufacturer of denim in India and the third-largest in the world. Home to thousands of SMEs and MSMEs across every industry, the state also has over 20 operational special economic zones. This signifies the demand of power by businesses in the state. And solar being more economic than grid makes a logical decision to follow.

Make it easy with MYSUN

These are just the five reasons why solar is a prudent investment for businesses in Gujarat. Choose to solarize your company today with MYSUN, be it in Ahmedabad, Surat, Vadodara, Kheda, Anand, Gandhinagar, Rajkot, Jamnagar or any other city of Gujarat and make the transition easy with sophisticated engineering and flexible solar financing options. Call our solar advisors today on +91 8448380218.

Source of data for the graphs: Bridge to India

How Solar Can Help You Plan Your Businesses’ Future...

The Residents of Uttar Pradesh Will Pay Up to 12% More...