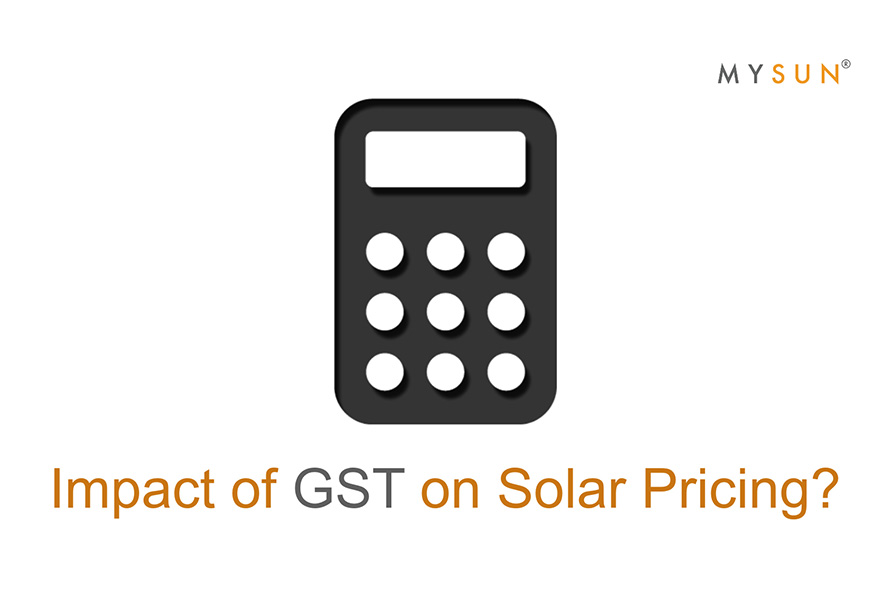 The Goods and Services Tax, also known as GST, is hailed as one of the biggest tax reforms of India and is expected to have a major impact on our economy. The main objective of this reform is to bring uniformity and transparency in the taxation system. In the latest GST council meeting, the agenda was to discuss and fix tax rates for 1211 commodities. The council proposed that few basic items will have no tax while other items will fall under four slabs i.e., 5%, 12%, 18% and 28%. But, what will be the effect of GST on solar?

The GST Council proposed that 18% tax be levied on solar cells and modules while coal was put in the lower tax slab of 5% against its current tax incidence of 11.69%. People related to the solar industry were either expecting complete exemption or a place in the 5% tax slab. However, it appears that the sharp decrease in solar tariffs and equipment cost have convinced the government that this sector doesn’t require any financial incentives. This argument was further strengthened by the renewable energy minister Piyush Goyal, who said, “Solar and wind energy have hit record lows and the industry is now able to stand on its own feet without any support.”

According to Bridge to India, this tax rate of 18% will increase module costs by 18%, inverters by 12%, and service costs by 3% therefore, the overall project cost will go up by about 12%.

Some key points worth pondering upon are:

It definitely is an unexpected hike which will have a domino effect on the industry and might result in delay of some ongoing projects. This will also have an impact on the rooftop industry which has started showing early signs of finally seeing some growth. This additional cost levied by GST on Solar will act as a deterrent for its quick growth and consumer acceptability.

We expect that the government will quickly take stock of the negative impact of the proposed GST structure on the solar industry and work out a mechanism whereby the growth of solar at this crucial juncture for the industry is not stymied. If the rooftop solar systems (which includes Solar Panels) come under 5% GST across India, as it seems from the paper published by the GST Council, then it is a big step forward and the residential, commercial and industrial consumers should take up this opportunity to Go Solar with a uniform tax rate. However is the effect of GST on Solar, as your personal solar advisors, we hope the move to GST will not be an obstacle to the positive traction that the industry is seeing and the Government will act in the best interest of the consumers, like you, who are interested in going solar.

Visit www.itsmysun.com or Dial 9818507770 for all your queries related to buying a solar system for your home, office or building. Post Update: It is mooted that on June 3, a revised figure could be announced. In the mean time, the Revenue Secretary has tweeted the following:

All solar equipments and its parts would attract 5% GST only https://t.co/Dqcq2IctOQ