Uttar Pradesh Set to Target 4.3GW of Rooftop Solar Installation as per the new Draft ‘UP Solar Power Policy 2017’: An Overview 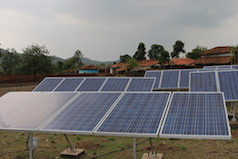 According to the UP Solar power policy draft, the state of Uttar Pradesh has a solar potential of 23.8GW and is targeting 10.7GW of commissioned solar power by the year 2022, with 4.3GW of this capacity assigned to rooftops. It is also included in the draft that the state is targeting to provide 24 hours of electricity to both rural and urban households by the year 2018-19. Under the draft solar policy of 2017, solar parks with a minimum 100MW capacity will be set up and the Government will provide incentives to purchase land on lease or usage. It is also mandatory that at least 50% of the power produced from the solar parks will have to be sold to Uttar Pradesh Power Corporation Limited (UPPCL) or a distribution licensee.

To encourage rooftop solar installations, the policy mentions that the Government shall promote and deploy rooftop plants for self-consumption on all State Government and Central Government-owned buildings. As for the incentives, the State Government will provide a subsidy between Rs 10,000/kW and Rs 20,000/kW on the first-come-first-served basis for the first 100MW applications submitted to UPNEDA in the private residential sector. In case the installation is delayed by more than six months, the subsidy will be withdrawn. The subsidy will be disbursed to the customer only after the commissioning of the project and submission of all the documents to UPNEDA. Just like the Solar Policy of Delhi, the height of the module structure will not be counted towards the height of the building and therefore no further permission of construction is needed. The nodal agency, that is UPNEDA will also ensure a single window clearance for all power producers, allowing to expedite the process.

With the policy still under review, we expect further modifications in the content of the UP Solar power policy draft. We are excited to see that the state nodal agency has identified simplification of the process involved in getting permits and approvals as a major thrust area. To provide further support to rooftop solar in the state, the state nodal agency along with the Discoms should work towards better implementation of the Net Metering policy. However, even in the current state, the policy is a much-needed thrust to the solar segment in what is one of the largest states in the country but with a meager 269.26MW of solar power commissioned till the year 2017.